A hallmark of the company since the 1920s, the Maison’s modular pieces include the iconic “Hawaï Passe-Partout" and “Zip” necklace
Van Cleef & Arpels’s stand at TEFAF Maastricht 2020. Courtesy of Van Cleef & Arpels SA.
By Stephanie Sporn  Dec 21, 2021
Share
Copied!

With fine jewelry, it’s often the seemingly simple pieces that are the most complex. A maison which has perfected that visual and technical paradox is Van Cleef & Arpels, prized since 1906 for its masterful innovations, many of which appear to exist as if only by magic. Such is certainly the case with its patented Mystery Set jewels, Van Cleef & Arpels’s signature technique which allows precious stones to be sinuously set without the visible disruption of prongs or metal components. Equally enigmatic and representative of the Maison are its transformable jewels, whose modular structures allow for versatile wear and statements both delicate and grand.

Continuing a heritage of transformable jewelry from the 18th and 19th centuries, Van Cleef & Arpels’s convertible creations became a hallmark of the company in the 1920s, says Lise Macdonald, who has served as the Maison’s Patrimony Director for four and a half years. In addition to conserving and preserving Van Cleef’s extensive archives, Lise Macdonald’s team manages a patrimonial collection of nearly 2,000 jewels, watches, and objets d’art, which is exhibited at the Galerie du Patrimoine at Place Vendôme in Paris, as well as in traveling shows.

One transformable standout included in the recent “Gems” exhibition at the French National Museum of Natural History in Paris was a pair of cuff-bracelets formerly in the collection of Daisy Fellowes. In 1926, the French socialite and Singer-sewing-machine heiress ordered an emerald and diamond bracelet inspired by Indian motifs from Van Cleef & Arpels. Two years later when she commissioned an exact copy to adorn her other wrist, the Maison found a way to join the bracelets so they could also be worn as a necklace.

This 1920s Art Deco marvel anticipates two of Van Cleef & Arpels’s most iconic transformable jewels: the 1938 Passe-Partout necklace and the 1950 Zip necklace. Lise Macdonald shares that the Passe-Partout’s predecessor was the devant de corsage, an ornament sewn onto the stomacher of a gown. Typically resembling a bouquet, the jewel’s petals or flowers could be worn individually or in clusters.

With the 1939 Hawaï Passe-Partout, ruby and sapphire flowers were juxtaposed with a flexible 18-karat-gold Tubogas link chain, “an element of super contemporaneity inspired by the invention of the shower hose,” explains Lise Macdonald. A hidden clasp allows the piece to be worn as a choker, long necklace, belt, or bracelet. Now offered in other varieties, the Passe-Partout may also feature up to five detachable clips. 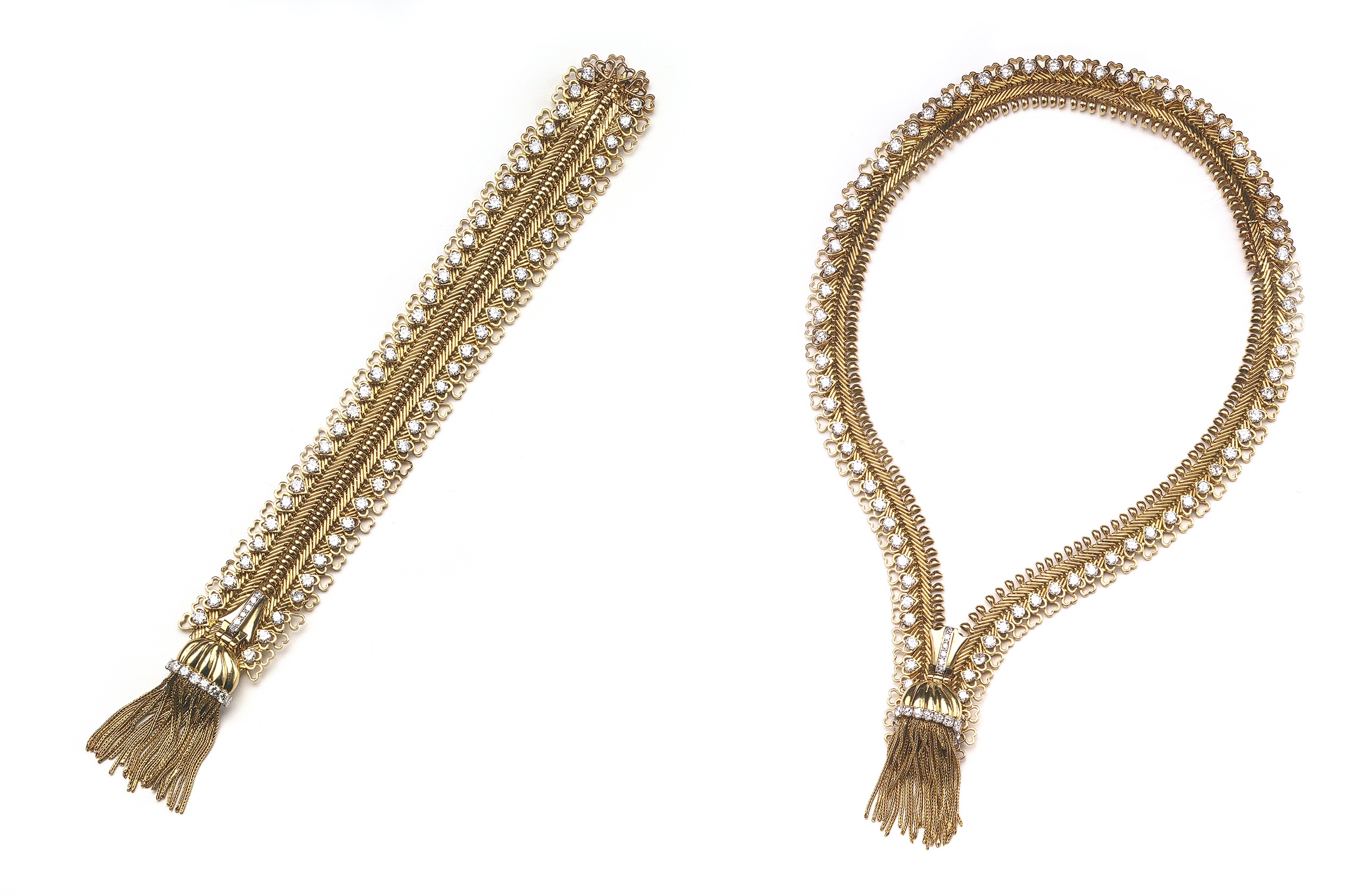 Perhaps no jewel marks as significant of a technical triumph as Van Cleef’s Zip necklace, whose revelatory design took 12 years of development. Used on 19th-century military uniforms in the United States, the zipper came to Europe in the early 20th century and was brought into high fashion by designers, such as Elsa Schiaparelli. “Like the Tubogas, the Zip has an element of the industrial world that is brilliantly transformed into Haute Joaillerie. It was quite daring,” says Lise Macdonald. Not only does the Zip necklace open and close, but it can also be converted into a bracelet. “When you hold a Zip, it’s almost like water. It’s very supple.” She adds that even after 70 years, their craftsmanship allows them to function smoothly to this day. In 2005, Van Cleef introduced the more slender Zip Couture model, meant to accentuate the wearer’s neckline or back.

As much as manmade feats of engineering have inspired the Maison, so has nature. While the idea of metamorphosis directly correlates to the structural transformability of Van Cleef’s jewels, the concept of movement in nature is also paramount. With the 1971 Walska Briolette Diamond brooch, for example, a bird of paradise appears midflight while suspending a yellow diamond of nearly 96 carats from its beak. The diamond can be removed and worn as a pendant, and the two wings can be worn as earrings. “Like photography, it’s about capturing the fleeting moment, but jewelry does it with precious stones and metal,” says Lise Macdonald on the theme of evolution in Van Cleef jewels. “In certain flowers, leaves, or even in feathers, you can see the breath of nature, the wind, and time.”

Another piece from the 1970s—a great period of transformable jewelry for the Maison—is a necklace that belonged to Begum Salimah Aga Khan. A theatrical and architectural highlight of the patrimonial collection, it features diamonds and carved emeralds from 18th-entury India and can be worn as two bracelets or a pendant.

Lise Macdonald additionally points out that transformability extends into the Maison’s accessories and everyday jewels. “The Minaudière is an example where you see the heritage of the 18th-century nécessaire turned into a multipurpose object. It serves as a compartmentalized bag, and its clasp can be removed and transformed into a clip,” she explains. “It’s an object of desire that is both organized and practical, as well as a jewel.” Since 1988, the Arlequine ring, whose top stone was interchangeable, was one of many modular “day jewels” the house created. “Transformability is present in Van Cleef & Arpels creations at different levels—it’s not just high jewelry,” says Lise Macdonald.

In any case, the Maison proves the whole is even greater when one can equally relish in the sum of its parts.

The Remarkable Stories Behind 5 Standout Works at TEFAF New York

From an ancient marble bust with art world provenance to a rare cabinet by Josef Frank, discover these favorites from the latest edition of TEFAF
Meet the Experts

Butterwick champions the work of this unknown avant-garde artist, whose Futurist work is now entering museum collections
Meet the Experts

In Their Munich Atelier, Hemmerle Champions Craftsmanship and Slow-Made Jewelry

Exploring the Evolution of French Royal Styles, from Louis XIV to Louis XVI

Guillaume Léage discusses the aesthetic developments and material elements of antique French furniture
Related Tags
Meet the Experts
We use cookies on our website to give you the best experience. Read more about our cookie policy.
Modify