In the Paris Home of Galerie kreo’s Founders, Surprises Await Around Every Corner

Brimming with personality, Didier and Clémence Krzentowski’s ever-evolving art and design collection was assembled over 30 years
À Chaque Stencil une Révolution by Latifa Echakhch, Dans Vō’s sculpture We the People, and a Gino Sarfatti chandelier feature prominently in Didier and Clémence Krzentowski’s living room. Cellae Coffee Table by François Bauchet is surrounded by CA21 Capitol seats by Pierre Guariche and Hieronymys Wood by Konstantin Crcic. On the table, Cariatidi statuettes by Andrea Branzi. On the wall on the right, a work by Barbara Kruger. to the left stands Virgil Abloh’s Efflorescence Bench 2. Photo: David Atlan.
By Stephanie Sporn  May 5, 2022
Share
Copied!

Stepping inside the dynamic Parisian home of Didier and Clémence Krzentowski, one would assume an interior designer was behind the dynamic arrangement. In fact, the Galerie kreo founders were staunchly opposed to working with one when it came to displaying their bold collection of art and design. “For us, your home is like your portrait. Very often, when you see the place of someone who has handed their keys to a decorator, you feel like you are in a hotel,” says Didier. Clémence adds: “We don’t like when a space looks too curated. It’s nice to feel something instinctive, something that is really you.”

Since 1999 when they established Galerie kreo, which now has locations in Paris and London, the Krzentowskis have made a career of following their intuition and allowing leading contemporary designers to do the same. As part of their innovative approach, their gallery functions as a “laboratory” where makers, ranging from Marc Newson to the late Virgil Abloh, are given the freedom to research and produce limited-edition furnishings and objects. “It’s quite key that all the designers we work with have careers in the design industry, but also experiment and create with us at the gallery,” says Clémence. However, there are no rules in terms of materials: one day, a collection on view can be composed of concrete; on another, hand-blown glass or carbon fiber. “If the designer only works for the design industry, then it’s creatively stifling for them because they always have to answer a brief rather than experiment with something personal or artistic. On the other hand, if you only do gallery projects, you can quickly become a designer who wants only to please the client and forgets about the creation.”

It’s a delicate balance that the Krzentowskis have mastered over more than two decades in business and three decades as life partners. Having met in 1986, they married and bought their home three years later—where they still reside today. In a classic Belle Époque building with jaw-dropping Eiffel Tower and river views, the collectors have assembled everything from prehistoric tools and meteorites to high-tech art and installations. To prevent their traditional apartment from looking like “Versailles,” as Clémence puts it, they bleached the original wood parquet floors and stripped back plastered support columns to expose their metal cores. In the resulting environment—a juxtaposition of a light-filled gallery with aspiring urbanity—the conceptual art the couple craves feels right at home. 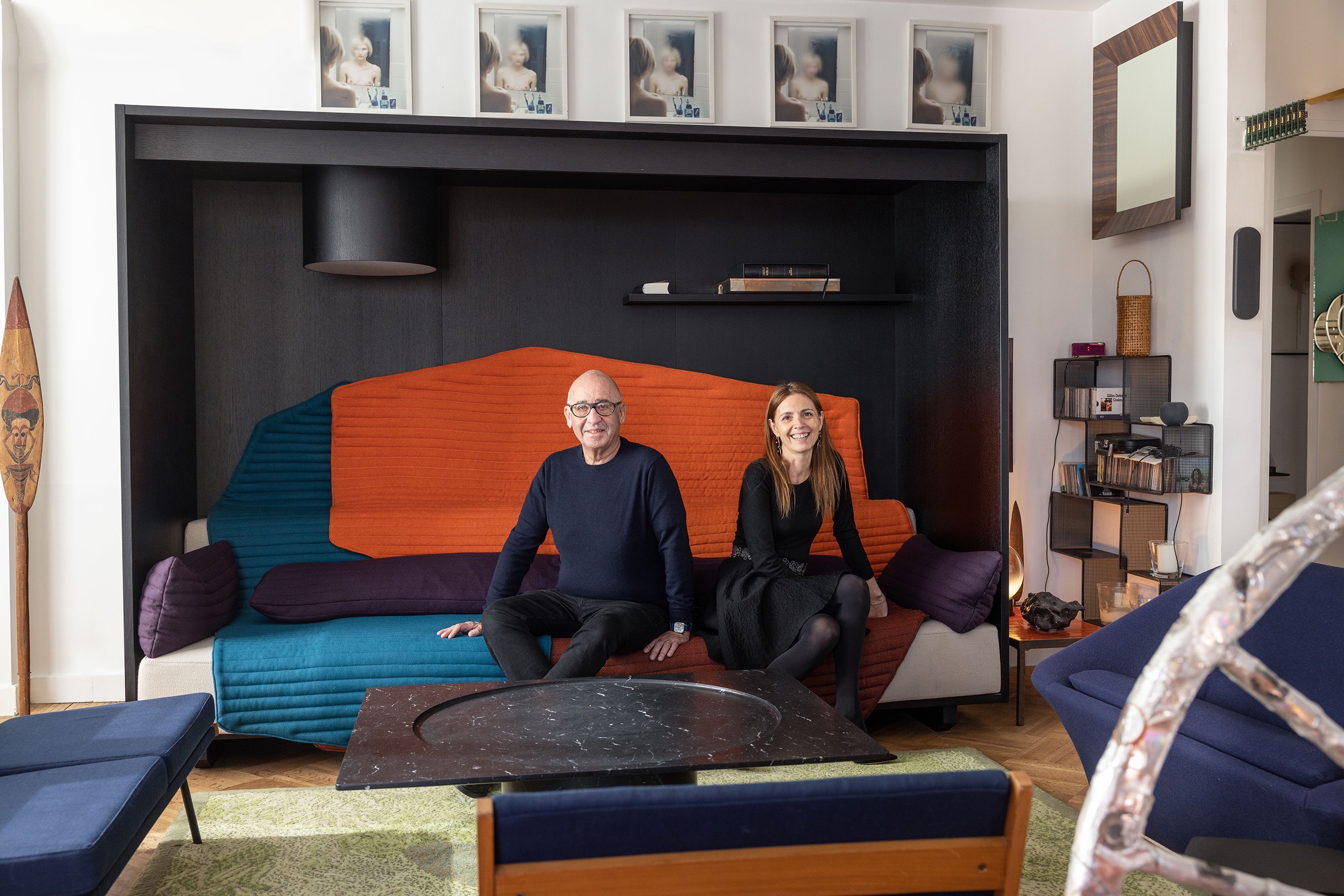 Didier and Clémence Krzentowski seated on a sofa by Ronan and Erwan Bouroullec next to a M.C. Coffee Table by Pierre Charpin and a sofa by Pierre Paulin on the right. Photo: David Atlan. © 2022 Artists Rights Society (ARS), New York / SAIF, Paris.

Among the earliest works the Krzentowskis acquired together are Allan McCollum’s 96 Plaster Surrogates, a 1989 installation of multicolored frame-like tiles, currently in the couple’s bedroom, as well as a 2003 photographic piece of a growling leopard by Barbara Kruger in the living room. While the couple is constantly moving items around their home, rarely do the works leave their collection. In the early 1990s, Didier was “obsessed” with photography, says Clémence, but after 20 years, he felt the collection was complete. They decided to sell it to pursue more contemporary pieces. “It was a kind of rebirth for Didier,” she adds. Didier describes collections as “imaginary puzzles that you feel,” ever-evolving to strike a fulfilling mix.

In the early 2000s, the Krzentowskis sold Maurizio Cattelan’s taxidermy ostrich to buy the neighboring apartment, which would allow their family of four to have more space. Of course, with more surface area comes more art and design—principally, those produced by designers exclusively for Galerie kreo. “That’s the beauty of collaborating with living artists. Every time we have a new show, we fall in love with pieces and want them for our home,” says Clémence referring to items like a large, color block sofa by Ronan and Erwan Bouroullec from 2008, as well as the more recent Quobus 2,4,6 two-colored shelves by Marc Newson from 2021.

Another passion represented at the gallery and in its founders’ home is mid-century lighting. The Krzentowskis have published multiple catalogue raisonnés on the topic, including the seminal text The Complete Designers’ Lights (1950–1990). While the gallerists also possess what is likely the most important collection of Gino Sarfatti lighting in the world, one piece by the Italian designer is particularly special to Didier. Nearly 30 years ago, he bought a colorful, constellation-like 191 wall light that Sarfatti made in the early 1950s for his light company, Arteluce. Didier recognized the work from being on the 1962 cover of revered architecture and design magazine Domus. “Gino was so advanced, but at the time, no one wanted to buy his creations. He was too avant-garde for the moment,” says Didier. 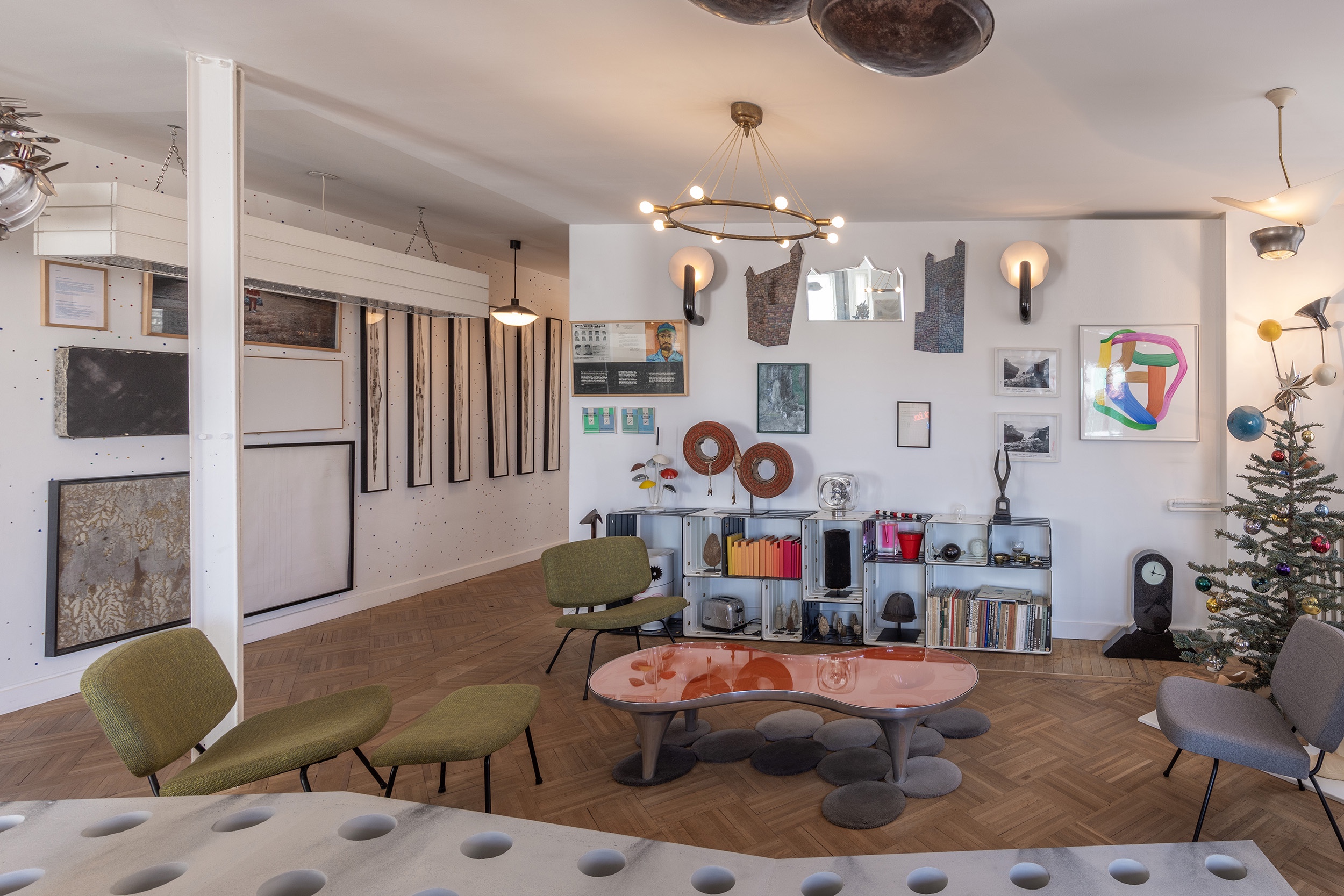 The Krzentowskis’ living room features Virigil Abloh’s Efflorescence Bench 2, Grappe Carpet by Ronan and Erwan Bouroullec, the Organe Chop Top Coffee Table by Marc Newson, and Newson’s Quobus 2,4,6 two-coloured shelves along the wall, which includes Pierre Paulin Elysée wall lights. Ugo Rondinone’s Thank You Silence is suspended from the entryway’s ceiling. Photo: David Atlan.
We don’t like when a space looks too curated. It’s nice to feel something instinctive, something that is really you.” — Clémence Krzentowski 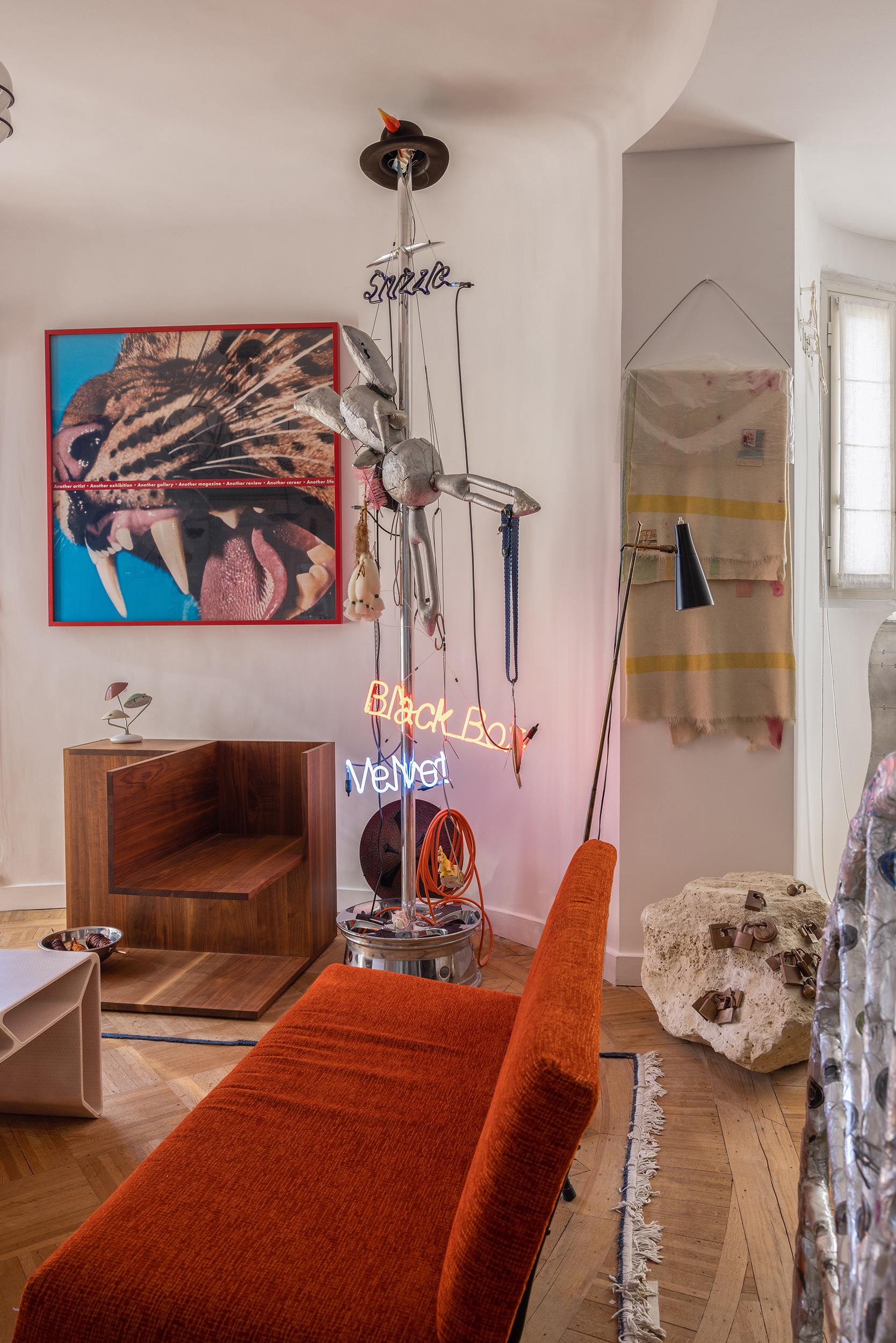 In the living room, a Florence Knoll sofa next to a work by Barbara Kruger, Jason Rhoades’s Snizzle, Black Box, Velvet, and Rock by Tatiana Trouvé. Photo: David Atlan.

Not far from Abloh’s work is Philippe Parreno’s painted, cast steel sculpture, titled Fraught Times: For Eleven Months of the Year it’s an Artwork and in December it’s Christmas. Beginning in 2008, the Algerian-born, Paris-based artist created 11 trees, ranging from scrawny to snowy and ornament decked, representing every month besides December. When taken out of a holiday context, the Christmas tree becomes a symbol of temporality. “It’s funny because we never had a Christmas tree, but now we have this one all year long,” says Clémence, who is partial to their “June” tree, as it’s her birth month.

Another work the couple treasures is a padlock-embedded boulder that their close friend Tatiana Trouvé made for them. “We love how there are many levels to Tatiana’s works. When you first see them, you don’t know everything about them—you have to dig,” says Clémence, who relishes in imagining what the secrets locked inside the stone may be. “We like when after a year or so of living with a piece, you see it differently,” adds Didier. “Sometimes you think about things that even the designer or artist never thought about.” 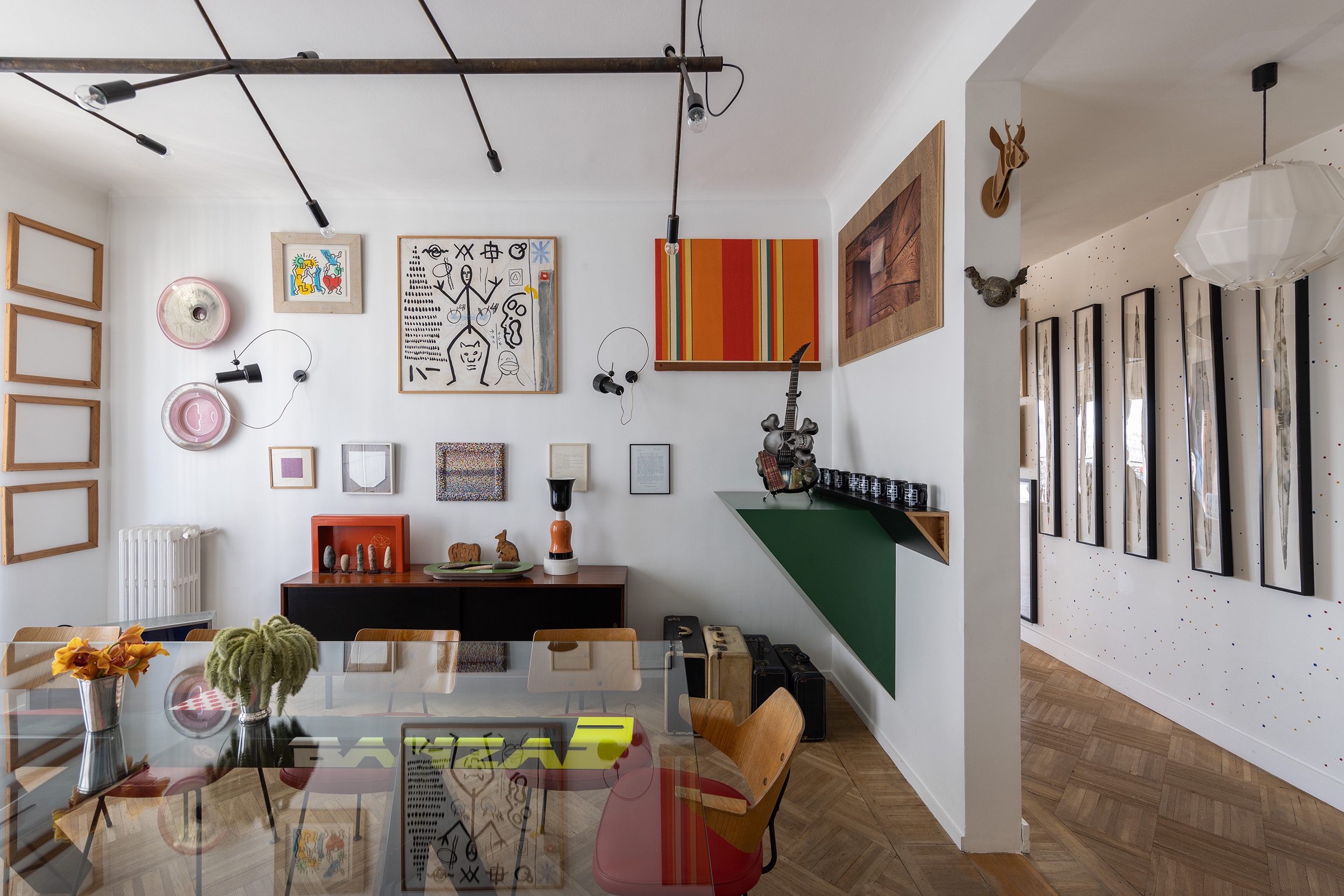 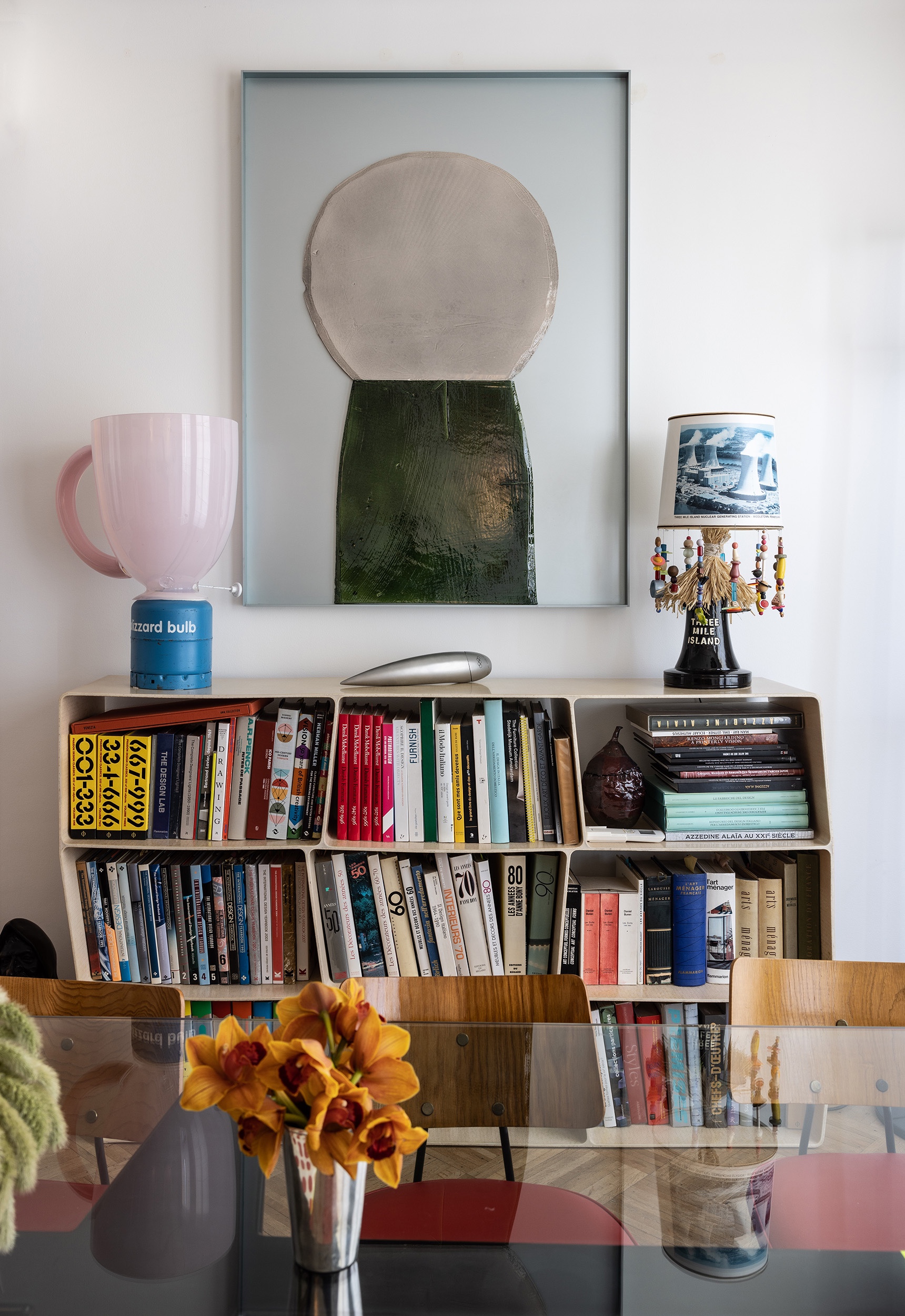 Although Sarfatti is one of the designers that the Krzentowskis have been collecting since before even opening their gallery, they always welcome the chance to encounter new artists. “The first step is always the work,” says Clémence. “It’s never a question of who did it.” For her, works must have a balance of aesthetics and story. One of her favorite pieces is Ugo Rondinone’s 2005 work, Thank You Silence, which is installed in the entryway. The motorized work, which is suspended from the ceiling, slowly dispenses fragments of white paper. “It’s like snow falling. It’s so romantic,” Clémence notes.

For Didier, a strong concept eclipses aesthetics: “I love seeing works that I don’t immediately understand.” He especially enjoys learning from later generations of talents who broaden his perspective and take advantage of new materials. A longtime admirer of Galerie kreo’s roster of creators, multihyphenate designer and late Off-White founder Virgil Abloh debuted his own limited-edition collection, titled Efflorescence, for the gallery in 2020. Didier loved the brutalist pieces Abloh produced, but upon finding out he planned to cover them in graffiti, Didier was confounded. “I told him that I didn’t like graffiti because it’s very ’90s,” recalls the gallerist. “He told me, ‘Come with me in the streets. For me, Le Corbusier invented colors, but graffiti is the color of the 21st century.’” Didier was convinced, and he now proudly displays a graffiti-covered concrete bench by Abloh in his living room. 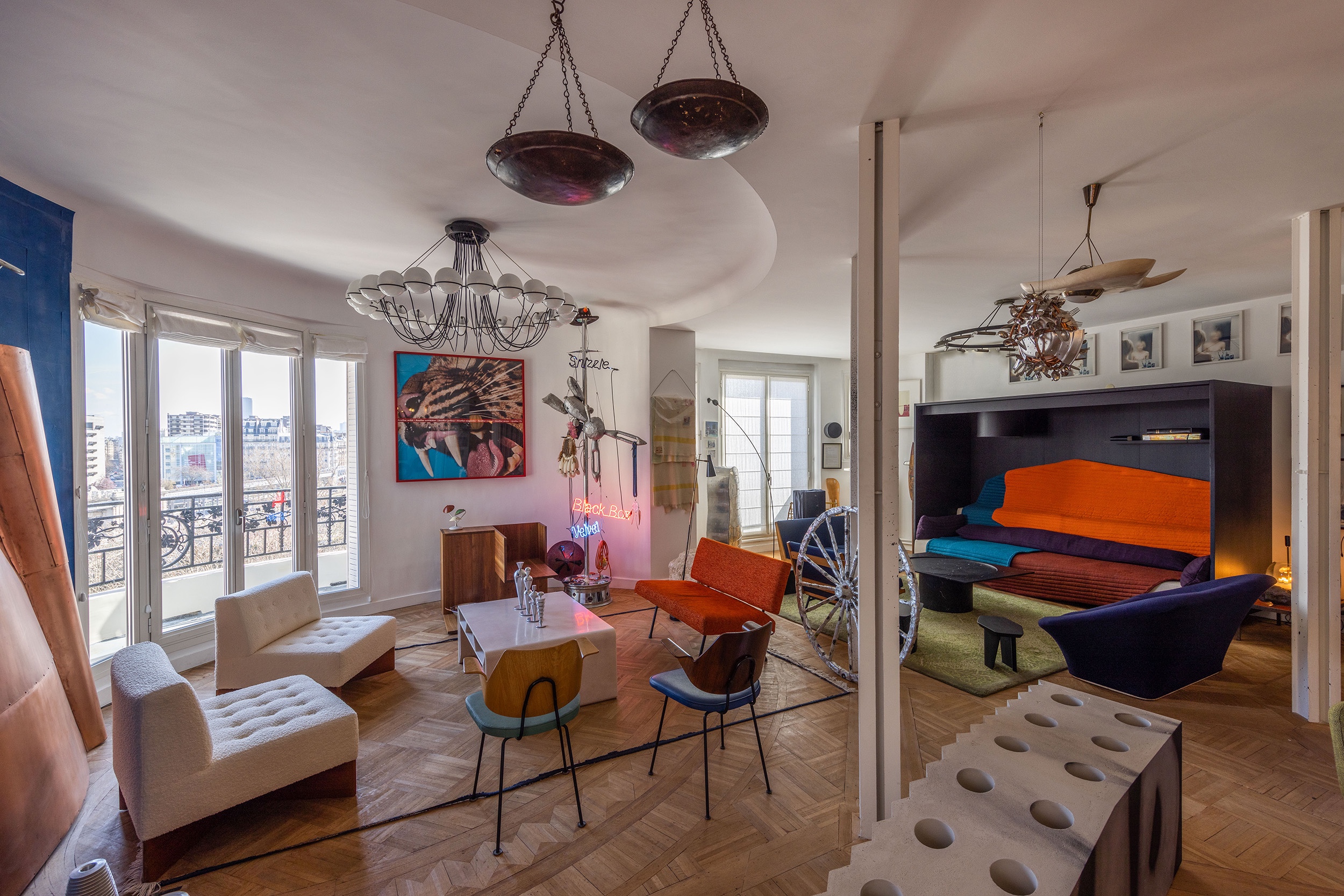 In the Krzentowskis’ living room, CA21 Capitol seats by Pierre Guariche surround the Cellae Coffee Table by François Bauchet. Atop the table, Cariatidi statuettes by Andrea Branzi. on the wall hangs a work by Barbara Kruger near Hieronymous Wood by Konstantin Grcic and a work by Jason Rhoades. The chandelier is by Gino Sarfatti. On the right of the room, a sofa by Ronan and Erwan Bouroullec next to a M.C. Coffee Table by Pierre Charpin and a sofa by Pierre Paulin. Photos: David Atlan. © 2022 Artists Rights Society (ARS), New York / ADAGP, Paris. © 2022 Artists Rights Society (ARS), New York / SAIF, Paris.
In This Story
EXHIBITOR
Galerie kreo
Paris

“It’s something much more powerful than yourself”: Vervoordt and husband writer Michael Gardner share their philosophy behind collecting art and what really makes a home
Living with Art

Eitle-Böhler shares how his aesthetic approach to collecting informs how he combines works of various periods and styles in his home
Related Tags
Living with Art
We use cookies on our website to give you the best experience. Read more about our cookie policy.
Modify